OnePlus Nord 2 rumoured to launch in Q2; tipped to be the first one without Qualcomm chipset

Speakers for your television: Here are the best ones to buy

The feature phone market in India has reached a 2 per cent year-on-year growth in shipments for the third quarter of 2020. According to reports by Cyber Media Research (CMR), the marginal growth is due to the economic conditions of the pandemic affecting the users of feature phone target markets. The market is dominated by Indian smartphone brands like Lava, Nokia and Karbonn.

The Chinese brand Itel Mobile has taken the lead in the feature phone market, reinstating its position after a 46 per cent year-on-year decline in Q2 2020. The company has dethroned Indian brand Lava to achieve an 19 per cent shipment market share, reporting a 5 per cent growth in shipment units. Lava stands at 18 per cent market share with a growth of a whopping 34 per cent. The company previously had 23 per cent of the shipments in the second quarter.

Itel Mobile is owned by Transsion Group, which also includes Infinix and Tecno. The report stated that the company grew 34 per cent YoY with Infinix registering 354 per cent increase in shipments. CMR suggests the company’s new smartphone models Smart 4 Plus and Hot 10 to be the contributor in the growth. Tecno recorded a 95 per cent YoY growth in its affordable phone segment with the launch of Spark Go 2020. Transsion owns a lot of inroads in Tier II and Tier III cities.

Samsung stood at the third position with 17 per cent in shipment units for the third quarter. It was the only brand to have shown a decrease in its shipments in the feature phone market share with 24 per cent YoY decline. However, the brand has taken a lead in both Indian and global smartphone market, dethroning Xiaomi and Huawei. Samsung’s range of affordable smartphones contributed to its significant achievement.

One of the notable mentions in the report was handset phones range by Cellecor, an Indian brand, that recorded a significant growth of 384 per cent YoY. The company has established itself in the last year, growing from a rather small base.

The last quarter report from CMR had pointed at the hopes of the Reliance Jio-Google deal can drive the market. “We believe recent announcements, such as the Jio-Google deal, augur well for the future of the mobile handset industry in India, and in potentially enabling the migration of feature phone to smartphone users, with its focus on driving affordability,” said Anand Priya Singh, Analyst, Industry Intelligence Group in the CMR report of Q2 2020.

Currently, most of the Jio handset phones feature 2G connectivity. The latest developments suggest that the new Jio phones will be in smartphone segments which are upgraded to 4G.

They will be targeted to the affordable segment with pricing of around Rs 2000. Another tech giant Flipkart’s in-house brand MarQ has also been rumoured to be developing a feature phone at a much affordable rate. With the revival of the smartphone and feature phone market, analysts have predicted that feature phones will see a technological development in the handset mobile industry with big corporations competing in this market. 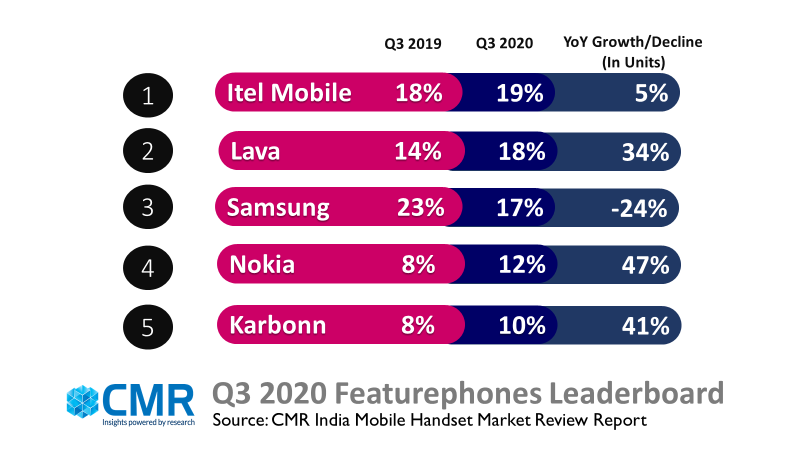 Itel is set to expand its smart TV range in India with the launch of new Android TV-powered smart TVs in March. Itel is...
Read more

Highest resolution in televisions: what do they mean?

The latest televisions today are packed with high resolutions, so much so that when a consumer goes to purchase a high-resolution television in any...
Read more

Ahead of summer 2021, the global e-commerce firm Amazon has finally kicked off its popular Summer Appliance Fest that will last until February 28....
Read more
Load more

OnePlus Nord 2 rumoured to launch in Q2; tipped to be the first one without Qualcomm chipset

The smartphone rumour mill was in full swing anticipating the launch of the OnePlus 9 series but the OnePlus Nord 2 has popped up...
Read more

While popular for its feature-heavy and easy-to-afford smartphones, Xiaomi is also known for its laptops, smart wearables, TVs, and other products. Amid a busy...
Read more

Speakers for your television: Here are the best ones to buy

High-end televisions come with good speakers but are you sure you are getting the right and the best sound while watching your favorite movies,...
Read more
Load more